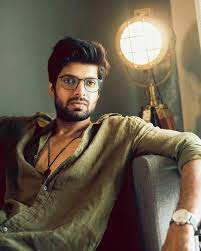 MUMBAI :Hitesh Bharadwaj first started his career as a news presenter on a local news channel and then went on to work as an RJ. He started his acting career from Suvreen Guggal – Topper of The Year. In 2016, he gained fame for his role as Ravi, the main character in the Hindi tv show Agar Tum Saath Ho.

Bharadwaj’s most notable performances had been as Sanjay Pathak in Iss Mod Se Jaate Hain and as one of the leads, Manav Sharma / Vikram Diwan, in the Colors TV series Choti Sarrdaarni opposite Nimrit Kaur Ahluwalia. He is playing Akampreet Singh Randhawa in Colors TV’s hit serial Udaariyaan since September 2022.

Tvnews got in touch with the actor, where he talked about a lot of things, including how he lost a big project.

Tell us about the first memory that you have from your first show.

My first show was Suvreen Guggal – Topper of the year. Shivin Narang and Mohit Malik were there too, I mean everyone knows them. There was a shot that I was not being able to give. I think we had started at 12.45 and it was finished by 1.15. The whole unit was waiting for lunch and the moment I gave a take, a crow started cawing. Sir joked saying that even the crow is asking how long would it take. Shivin encouraged me by calling me a rockstar and I can do it. I was just looking at him. It was the first time we ever had such conversation. He has always supported me, and same goes for Mohit. Now, we are all busy in our work and life. Recently, he had come to Chandigarh but we couldn’t meet. I miss him a lot.

A time when you actually faced a camera?

I was shivering, heartbeats were raising and in that moment I felt that if I do this, this would be it. I was scared but I did it. I was hosting a show when I faced the camera for the first time.

A time when you gave an audition?

I used to think that it’s nothing. I was very confident during auditions. I remember I used to take bus number 79 from Malad and go to Andheri. I remember, my shirt would be all wet because of the sweat from the travelling. But when I used to see others, they were all dressed up, looking perfect. I used to think that things might not work out here. I doubted whether I was fit.

A time when you felt that you are successful?

I feel that this is my work, and the fame I get is just going to be an outcome of it. It’s a by-product. The product is my craft. Sometimes I feel like I’m working too hard and I start wondering why. I also want to relax, enjoy a little, or travel somewhere.

A time when you had your fan moment?

Gulzar sir is that person in my life I can do anything for. If someone tells me that Gulzar sir is walking over there, I would go running to meet him. If someone tells me that this is cloth has touched Gulzar sir, I would buy it. I am that crazy about him. I remember there was once a ‘Lit Fest’ in Bandra and Gulzar sir were there, talking about how things went during the partition. Tears came running down while talking about it and in that moment, I started to cry as well. When it was all over and he came out, I was just looking at him. I asked him if I can take a picture. Maybe he didn’t understand. So, I just touched his feet and he said “be happy”. I cannot forget that “be happy” ever.

How was it when you saw yourself for the first time on a big hoarding?

It was during Agar Tum Saath Ho. I always get mesmerized when I see myself like that and I tell myself that it’s just a part of this job that I’m doing. Truth be told, I don’t ever have a lot of expectations in life. The journey I told you earlier, going from Malad to Andheri and the shirt being all wet, I used to feel like I am broke. But also, what if something magically happens. My first goal was that I wanted to shift to Andheri from Malad. I mean that’s the amount of money I wanted because I didn’t want to take that bus.

Tell us about the time when you had your fake casting experience?

I got a show once, for which I went Mathura. I had told my parents that I have signed a show. I had actually signed a contract. Someone called me, asking me to come quickly so I booked tickets on the spot, even though they were expensive. I reached there and something happened, after which they didn’t call me. I kept waiting and prepping for another show I had. An AD from the previous show had asked me what am I doing these days and I told him that I’m shooting for the show. Shockingly, he said that he is the AD of the show and some other guy is casted. I told him that I’m doing it. Later, I called the casting director and he said that I’m doing it. I asked him not to lie. We had a fight and in the end, he told me that I’m not casted. I remember I had auditioned once and asked the creative director about my performance. The person said “very bad”. I was stunned in that moment. I could not understand what to do and I sat at Juhu beach for hours, thinking how is life going to turn out to be.

A time when you spotted a fake profile of yours?

There was a fake profile of one of my co-actors. Instagram was new at that time. Someone sent me a message from that profile and I replied. After that, I asked her why she is texting me on Instagram and not Whatsapp. Later on, I got to know that it’s a fake profile.

Which answer you liked the most of Hitesh?

Guess who Shahana aka Aparna Mishra from Kumkum Bhagya is showering kisses on?

Jhalak Dikhhla Jaa 10 Semi-Finale: Gashmeer Mahajani gives a splendid performance during the semi-finale; Kajol calls him the “Bajirao Singham of the show”

Exclusive! Hitesh Bharadwaj goes down the memory lane; shares his experience of auditions and shooting